I wrote a longer piece about my feelings on crypto-art schemes and crypto/blockchain in general presented as a solution to current perceived ills around arts funding, artist ownership and control of their work, and DRM/"authenticity" of digital items. It started as a Zonelets post but it just got rather big and I realized I was putting a lot of my writing energy into making shorter things for this blog rather than essays for my main site, so I decided to go back to that for a bit. I also framed it as about provenance because even just mentioning "crypto" or "blockchain" or "bitcoin" on searchable social media platforms seems to bring a platoon of its defenders who are convinced you just don't get it and if they explain it the right way you'll tooootally realize how important it is straight to your mentions.

The thing is, I've had it explained to me a ton of times! I've been to a seminar for how art organizations could use blockchain, I've been to exhibitions of blockchain based works, I've read books and academic articles explaining its financial and social functions, and the one thing all of these had in common was profound ambivalence when it came to questions like: "Do we actually need this?" "Aren't there less complicated ways to do the same things?" "Do the possibilities really require the level of computing power and expertise?" It's like... ehhh! *Shrug* And this is a sort of broad-mindedness and honesty I almost never get from the hardcore blockchain evangelists, because for them it simply has to be revolutionary.

Several crypto-art schemes have started up or gotten some press in the recent weeks, which is what motivated me to write this piece. One of them offers the feature of contracted payouts to artists every time their work is sold for a higher price, and it also distributes these payments to each previous investor as a "patron" of sorts. But like... you know what this starts to look like... 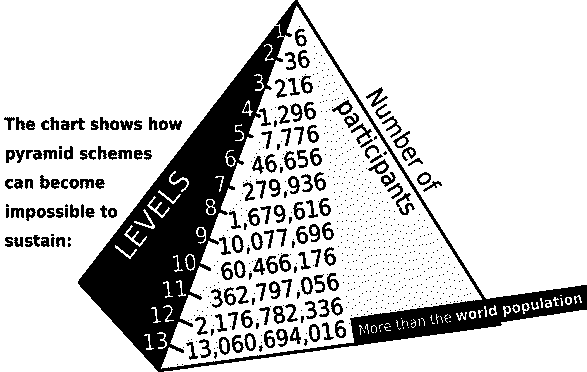 In this case, despite some ostensibly-progressive words about artist ownership and control, it's not the artist who gets the ultimate payout, since they're only attached to the artworks they put into the system. Obviously the ultimate payout goes to the marketplace which is the tip of this pyramid, with its finger in the pie of every single artwork and transaction.

These waves of launches and waves of bitcoin evangelism are somewhat inevitable, and quite similar to the GameStop stock shakeup from a few weeks ago. The language of opportunity, democratization, and even sticking it to the man are enticing invitations to bring newbies into a hierarchical system they feel like they can win at, maybe for just a moment. As they buy in, maybe some find temporary success but the more significant returns of course always float to those already at the top, who have determined the shape of the system to begin with. And the shape is always the same.

Put aside the fact that blockchain is, for the most part, a massive waste of computing power and energy in a period where it's increasingly urgent that we use what we have efficiently and wisely, if you can. Even then, art markets on the blockchain only provide pretty decor for these systems of hierarchical financialization taken to its most extreme limit. "Art washing" refers to the role art has played in softening the reputations of institutions or wealthy individuals responsible for truly harmful and exploitative things. Like all other instances, I find this aspect of crypto-art to also be distasteful.