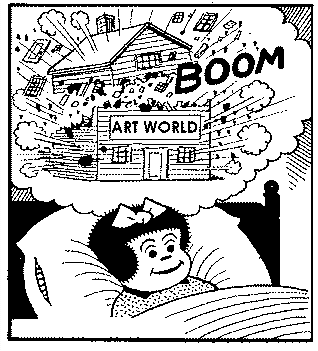 Vault 819, Underground is obviously an insane, near future sf 1982, Janine pastiche, though I appreciate it's probably not obvious if you haven't read the novel. Written by Alasdair Gray following his debut Lanark, the book was fractiously received at the height of the so-called "porn-wars" era of regressive feminism because the main character's interiority is mainly conveyed through narrating his own sexual fantasies, for the first third or so. Obviously anyone who got mad about this didn't finish the book. Which is a shame, because it's a wonderful kitchen sink sort of novel that combines erotica with ime shockingly affecting passages on gender with cold war era political commentary and tragicomic life writing etc etc... it's the kind of novel you don't want to read while working on your own (oops!) because it really jolts you and makes you think of what the hell you think you're doing. I loved it and still think about particular passages every few days. I highly, highly reccomend it.

I actually started reading it when the discussed theme was circling around the idea of tunnels, subterranean bunkers and so on. I guess I imagined it would involve more busty women squirming through dire prison break scenarios, but there's only a little bit of that. Regardless, crossing it with the institutional prison of the art world (hyper-secure storage of financialized art assets) still produced a lot to work with. In terms of putting the game together, I worked with fellow Domino Clubber Candle on the Tape Window System style display. It was a demo they'd had sitting around for a while to mimic the style of The Silver Case games (called, in-game, the "Film Window System") in a browser format. It looks great, and is all CSS and HTML tweaks under the hood, for me at least, which is what I'm already comfortable with. It only took a little bit of back and forth to get most of the effects I wanted and some I even figured out how to do by myself!

The main challenge and time sink was writing! I knew how I wanted it to look from the start and Candle was able to make a working version of what I was envisioning before I was even ready to use it, and (building on Flesh/Circuit), I wanted to hit on the use of stock/repurposed imagery even harder for thematic purposes, and also because of the condensed timescale combined with my inability to draw. In the end, the text is around 8,000 words, making it about as long as Flesh/Circuit as well. A lot of my attempts at "short fiction" have come out to around that level recently, which makes them hard to place. Idk! I hope someone makes the time for them and likes them, I suppose.

The police station setting of the sexual fantasies in the first half of 1982, Janine sets up the psychological landscape of the main character: being a middle aged Tory, or petty, un-glamorous fascism. Over the course of fantasizing, the inherent contradictions of this position break through and break down his mental routines. Obviously this is a really ambitious premise for a novel where the functional action is this guy getting drunk and jerking off in a hotel room after work. That's what happens here too, except it's a woman I guess... the hotel room description is taken directly from an unnerving EasyHotel experience I had in London (where else?). There's also the joke about the Festival of Brexit oops I mean the Festival of Britain I mean the Festival of Great Britain and Northern Ireland I mean I don't fucking know Something About Creativity as the most garish recent example of watered-down "culture" and "creativity" (by committee of course) being used to shore up increasingly violent, immiserating nationalism, but the entire structure of art patronage and ownership, even/especially when the state is your patron, is a sort of metaphorical imprisonment and punishment zone for the spontaneous generativity of human consciousness. (Also I did not know that the festival had been rebranded in exactly the way The Artist proposes as the foreplay scene's punchline, in real life, at the time I wrote it. But I guess it was the most obvious gag.) 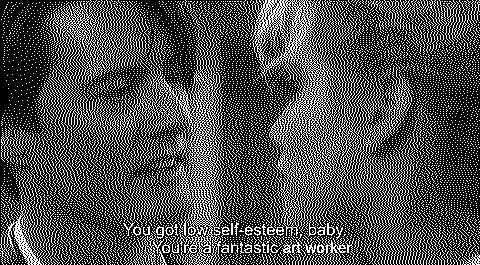 Even while the main character in my adaptation is not the openly conservative security system inspector from (the start at least) of 1982, Janine, she still has an element of squeamish conservatism in the sense of working for and wanting to be a success in this area, despite a comprehensive awareness of its stupidity and the total lack of dignity it's come to offer for anyone except profoundly mindless ex-MP hirelings and the like. Similarly to the novel, the process of undirected fantasizing eventually cracks through this deluded "realism," leading to epiphany and denouement. I'm interested in the role fantasy/imagination plays in "real" life, how it can be coerced or primed, how it can defer certain things, how it ultimately remains unruly and unpredictable... This is also why I selected "X Offender" as the song Janine sings at karaoke, which I previously had discussed in the context of romance fantasy-contra-reality as it shows up in Chulip, though I also briefly considered both "Caroline No" and "Picture This."

Now to be a peevish little Adorno, there's also the element of algorithmically generated/augmented reality fantasy that is alluded to through the visual interface, and is the main element of speculative world-building IMO, because I see personal tech changing a lot more over the next few decades than art storage or the economy of art production. It's the main new element that doesn't appear in 1982, Janine, when I had lifted so many more (college flashback, dead friend with vaguely homoerotic entanglement, Trident and space exploration references, quitting letter, gender ambivalence, did I mention how desperately I reccomend this novel, etc). I guess I've been interested lately in how algorithmic legibility constrains both what we do and what we want. A lot of people seem stuck in pitching work towards palatable categories or not knowing what to do with work that doesn't go into any of the ones currently in play.

I hate feeling mis-recognized by stuff that's supposed to be "for me," the uncanny ads platforms serve me, the artificiality of stock image representation, and the idea that ie thinkpieces on how I should be excited about twee sapphic new traditionalism aesthetic trends would make me want to do anything other than throw a broom at someone. We all hated when "algorithmic curation" was introduced to platforms that were previously chronological but now that there's one that originated that way it freaks me out that people are seriously like "this is the good algorithm actually" before showing me even more superficial, shallow, bloated and impressively unfunny content than I've ever encountered before. So I guess all these negative feelings towards everything friendly and supposed to be "for me" was the most driving aspect of both the visual format (unnerving and ironic "results" being thrown up to illustrate the internal fantasy) and cynical emotional tenor of the game.

Domino Club is "anonymous," though my work was really obvious in this case and is usually at least "somewhat obvious." I see it more as anonymity to the public, so that it's possible to stumble on these things as mysterious, or make something that goes against public personal "branding," etc, and also share it collectively, as a "look at what all of us did," as a community of like-minded peers with similar priorities and interests, rather than the absolute logistical misery of group projects. This work is totally against what the algorithm favors, hustle, what you can turn into a portfolio piece or somehow monetize etc and I think that's good... it's easy to forget when so many things are put in front of you as "important" or "popular" for some reason or another that things can just have value and be compelling in their own right, in a way you can encounter completely accidentally. I find working in this way, among the other Domino Club members, extremely inspiring and worthwhile!

I've talked a lot about my own submission here, bc this is the postmortem blog post, but obviously you should check out and play all the other Domino Club games now, if you haven't already.